Just where the heck am I?

You thought you were in a math olympiad training camp. Just a boring old program where they just make you take math tests all day.

But so many strange things were happening that you couldn’t explain. It started with that footnote in the handbook saying “this handbook is not a puzzle”. What was that doing there anyways? And then you found a secret message in some passwords, and some tests that were never scheduled. And to top it all off, you found a tunnel behind the campus, to a place you didn’t even know was there.

Deep underground, you find your surroundings are pitch black. Just darkness as far as the eye could see. A void so deep that it looks like the night sky.

Am I not supposed to be here?

But you think about what you’ve learned, and putting it together, you figured out the answer to the MOP metapuzzle: you need to USA CHROMA KEY. Red, green, and blue, the three primary colors. Using the power of the primary colors, you flood the cave with a faint glow.

Now you can see enough to make out that there’s a fragile-looking bridge in front of you, stretching over a gaping chasm.

There’s… more? And here you thought maybe you had reached the end.

You take a deep breath. There’s only one thing to do… 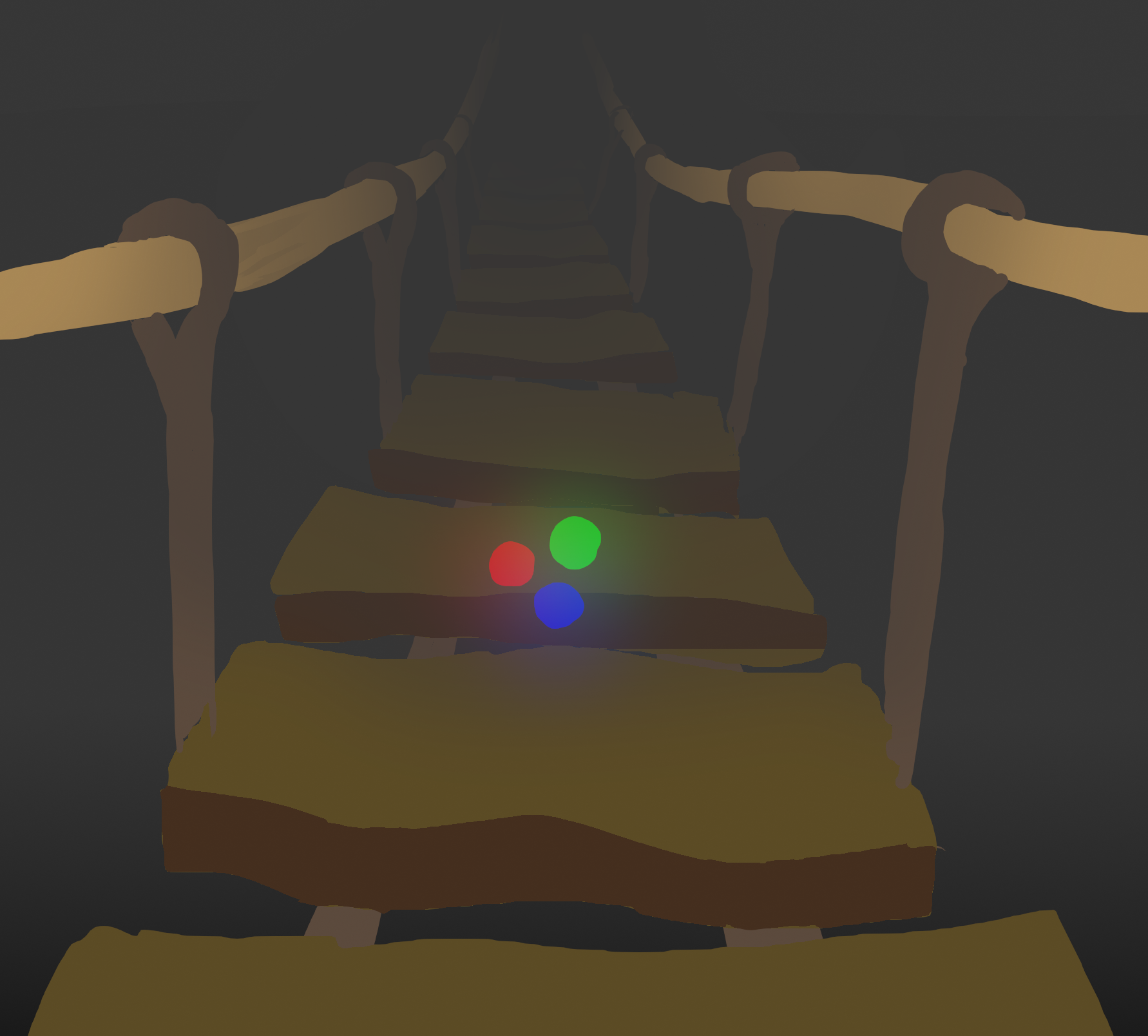 This solution describes the version of the puzzle given at MOP. See the author notes for the public version given after MOP.

This kick-off puzzle is started by looking at the test passwords.

Hints about the passwords

There were a few hints that the passwords to this year’s MOP tests were not random:

The message in the passwords

The passwords to the MOP 2021 tests, in the order they appear, are:

With the exception of the Sample0 edge case, these passwords are in alphabetical order. So the first step is to reorder the passwords by the last digit, which turns out to correspond to the string in Sample0.

Reading the passwords, one finds what is evidently a message (with underscores denoting spaces), although it seems like the last row of the table is missing. This is confirmed by the Sample0 password having an E in it, which is apparently not here. Filling in the last row to complete words gives the following:

Reading down the columns (like MOP 2020), this spells the message IT'S HERE YOU MERELY NEED TO FIND IT BEHIND THIS MAP OF WORLD.

This clues looking at the MOP 2021 world map and seeing what is going on there. (Really observant MOP students might have noticed that, behind the world map, one would see the word “Loading…” while the main image started up.) If one makes a copy of the document and moves the items aside, one finds a large downwards arrow. Opening the arrow leads to the MOSP website and starts the hunt.

Upon reaching the MOSP website for the first time, solvers are greeted with the answer checker to K and are prompted with the following message:

So, the solvers start to look for these exams in other places. If the solver thinks back to where the arrow in the map was pointing, it was pointing towards the TinyURL at the bottom of the page. (This was hinted on the scavenger hunt spreadsheet as well, with the hidden message hi~ congrats on finding this message when you find the arrow look where it's pointing in cells that looked like they were blank.) Together with the suspicious 8’s at the end of the URL, solvers need to guess three tinyURL’s for Test 8, Quiz 8, and Mock IMO Day 3.

This gives the solver three new files containing problems from past MOP tests. They are password protected, but the password is known from earlier step.

For each pair, the solver writes down the test it came from and the hexadecimal digit at the end of the corresponding password. In this way, one obtains 12 hexadecimal color codes. (The step of looking at hexadecimal colors was also clued in tests on Gradescope, in which the due times spelled out HEX COLORS via A1Z26 on the irregular minute times.)

Each of the colors has a canonical name; these are also the top results obtained when searching the specific hex code.

(The fourth color is also called Cinnamon or Chocolate in some places.) Reading the first letters of the colors spells USA CHROMA KEY, the answer.

The K puzzle was written before any intention of creating a proper hunt. Originally, I figured that people would be expecting something in the test passwords, and I set a single puzzle K with some shortlist problems as a reward.

Because MOP exams are divided into color groups that happened to match the primary colors of light, I thought it would be fitting to make a puzzle about hexadecimal color codes. That’s how we got the idea to build the puzzle around the theme of a completely black screen, which was illuminated by using light. At the same time, I was thinking about how it would be pretty easy to “hide” an extra link in the world map, because it was sent to students as a Google Drawing, not as a PDF or other reasonable format.

Then, I thought that a one-off puzzle was too underwhelming; after all, Evan is the most extra person™. So now there was a full round of puzzles.

We had to adapt the puzzle for the public to not incorporate MOP test materials, and thus we used the MOP 2019 tests, which have been mostly posted in some shape or form by now. (We themed this in terms of a MOPper at the last in-person MOP, and adjusted the map accordingly.)

In the public version, in lieu of the tiny URL’s, the solvers are simply given a problems file using problems from the MOP 2019 test (which are posted). Enumerations are given for the colors to confirm them (the main ambiguity is OLIVE vs HEART GOLD), giving the following table: